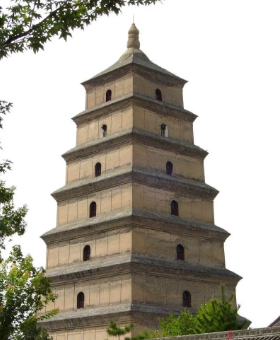 The Dayan Pagoda  is a Buddhist pagoda located in southern  Xi'an, Shaanxi province, China.Because its long history and deeply coulture influnce,the Dayan Pagoda attracts many visitors from the world wide.

It was built in 652 during the Tang dynasty and originally had five stories. The structure was rebuilt in 704 during the reign of Empress Wu Zetian, and its exterior brick facade was renovated during the Ming dynasty. One of the pagoda's many functions was to hold sutras and figurines of the Buddha that were brought to China from India by the Buddhist translator and traveler Xuanzang. Today, the interior walls of the pagoda feature engraved statues of Buddha by the renowned artist Yan Liben.

The original pagoda was built during the reign of Emperor Gaozong of Tang (r. 649–683), then standing at a height of 60 m (177 ft). This construction of rammed earth with a stone exterior facade collapsed five decades later. The ruling Empress Wu Zetian had the pagoda rebuilt and added five new stories by the year 704.

A massive earthquake in 1556 heavily damaged the pagoda and reduced it by three stories, to its current height of seven stories.

The structure leans very perceptibly (several degrees) to the west. Its related structure, the 8th century Small Wild Goose Pagoda in Xi'an, only suffered minor damage in the 1556 earthquake (unrepaired to this day). The Giant Wild Goose Pagoda was extensively repaired during the Ming dynasty (1368–1644) and renovated again in 1964. The pagoda currently stands at a height of 64 m (210 ft) tall and from the top it offers views over the city of Xi'an.

The tower sits inside the Daci'en Temple complex ("mercy and kindness"). The Daci'en Temple was built in 648 to honor the Empress Zhangsun. The temple complex is open to the public and it receives millions of tourists each year. It can be accessed from the Da Yan Ta station of line 3 of the Xi'an Metro. One entrance is located at the northeast corner of the north plaza. A new entrance has opened during the end of 2017

Next Article: Walking on the Xian City Wall