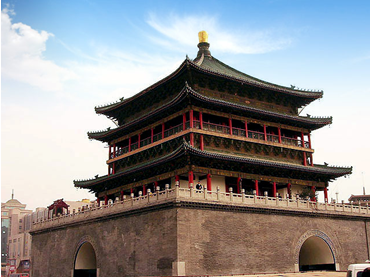 The wooden tower, which is the largest and best-preserved of its kind in China, is 36 meters (118 feet) high. It stands on a brick base 35.5 meters (116.4 feet) long and 8.6 meters (28.2 feet) high on each side. During the Ming Dynasty, Xi'an was an important military town in Northwest China, a fact that is reflected in the size and historic significance.

The tower was built in 1384 by Emperor Zhu Yuanzhang as a way to dominate the surrounding countryside and provide early warning of attack by rival rulers.
It has three layers of eaves but only two stories. Inside, a staircase spirals up. The grey bricks of the square base, the dark green glazed tiles on the eaves, gold-plating on the roof and gilded color painting make the tower a colorful and dramatic masterpiece of Ming-style architecture. In addition to enhancing the beauty of the building, the three layers of eaves reduce the impact of rain on the building.
On the second floor, a plaque set in the west wall records the relocation of the tower in 1582. When it was first built in 1384, it stood near the Drum Tower of Xi'an on the central axis of the city, and continued to mark the center of the city since Tang Dynasty and the following the Five Dynasties and the Song and Yuan Dynasties. As the city grew, however, the geographical center changed. Therefore, in 1582, the tower was moved 1,000 meters (3,280 feet) east of the original site. Except for the base, all parts are original, and history tells us that the relocation was accomplished quickly and inexpensively, making it a truly notable achievement in the architectural history in China.

Originally, the northwest corner of the tower housed the famous Jingyun Bell from the Tang Dynasty. Legend has it that although nothing had happened here, the Jingyun Bell fell silent during the Ming Dynasty, so the current bell, a much smaller one weighing only 5 tons, was cast. The original one can now be seen in Stele Forest.
The engravings on the doors reflect the decorative fashion of Ming and Qing Dynasties, recounting popular stories of ancient China.
On each side of the base, there is an arched door 6 meters (20 feet) high. In the past, vehicles were allowed to pass through the arches, but as the city has grown, the volume of traffic has become too great, so a bright, spacious pedestrian subway has been constructed under the tower. The entrance to the tower is from this subway.

A fenced-in area around the tower is planted with grass and flowers. In early spring, the tender plum blossoms and bright new grass surrounding provide a harmonious contrast. Not far from the tower, modern shopping malls and a brightly decorated square reveal the prosperity of the city. When night falls, lanterns hung from the eaves illuminate the tower, making it even more enchanting.

The Bell Tower definitely deserves a visit on your trip to Xi'an.