The famous Famen Temple, renowned for storing the veritable Finger Bone of the Sakyamuni Buddha, is located in Fufeng County of Shaanxi Province, 120 km (75 mi) east of Xi'an and 96 km (60 mi) west of Baoji. With a history of over 1,700 years, it is considered the "Forerunner of the Ziggurat in Central Shaanxi." The Famen Temple Cultural Scenic Area comprises four sectors including the Temple Gate Square, Foguang Avenue, Famen Temple, and the Namaste Dagoba. 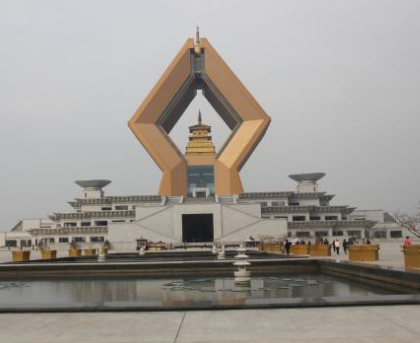 The scenic area is known as the "No. 2 Cultural Symbol of Shaanxi", second only to the Terracotta Army. It stands out as a world-class cultural scenic area featuring the "Time-honored Buddhist Holy Land and Age-old Classic Buddhist Site.

The four gates of Famen Temple. Between Temple Gate Square and Foguang Avenue stand four gates: Foguang Gate, Prajna Gate, Bodhi Gate and Perfect Wisdom Gate. Foguang Gate is where the light of Buddha is said to deliver all beings from torment and guide them to the Buddhist Faramita. Inside the Foguang Gate are two still water pools known as the "Heart-Pacifying Pools." As a sacred symbol of Buddhism, the lotus flower living in mud, but not stained by it, signifies the purity of Buddhists in the impure material world. Prajna refers to the great wisdom of Buddhism. The Prajna Gate means that during Buddhist medication, only by observing the guidance from prajna, can perfect wisdom and the most supreme Buddhist enlightenment be achieved. Bodhi means enlightenment and wisdom. By passing through the Bodhi, one can awaken to Buddha dharma and reach superior Buddhist thought. The architectural design of the Perfect Wisdom Gate, which consists of gateposts only, shows that the Buddha dharma is attained by observing sunyata (the nature of the void). Therefore, the Perfect Wisdom Gate is also called "Gate of Sunyata."

The history of Famen Temple : Built during the Eastern Han Dynasty to enshrine Sakyamuni's sarira, Famen Temple, which was built around the dagoba, was originally named "Asoka Temple." During the Sui Dynasty (581-618), it was renamed "Chengshi Buddha Mandala." In the Tang Dynasty (618-907), it was given its present name. Later, by holding several ceremonies enshrining the relic of Sakyamuni's finger bone, it became world-famous. The most representative structures here are the Famen Temple Pagoda and Famen Temple Museum.

Next Article: Seven Foods Should be Avoided for Our Beauty